About 10pm we heard a rumble upstairs and then Gavin screaming, we ran up and Gavin had got sick all over his bed and was shivering.
We brought him into our bed and try to calm him down. We the then took him temp and it was 39.2 degress.....we couldn’t believe it was so high so that meant a quick run to Crumlin hospital


We packed the bags and off we went
We were seen by a doctor a few hours later who thought Gavin had a viral infection; they took blood from Gavin’s Hickman line and also from his hand.
We knew from previous temp that it would take 24-48hrs for the blood cultures to come back and see if there was an infection anywhere so we were then allowed to go home
On Monday afternoon we got the call to say a bug had grown in the blood cultures and he would need IV antibiotics for about 5 days which turned out to be almost 8 days...


Well this is the worst part of having an infection, 5 x 8 room and not allowed to go outside,
Since Gavin was feeling well but the infection was in his blood it was very hard to try an explain that he couldn’t leave the room
We could write a book on how to keep a child entertained while in isolation 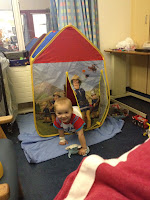 Some games like hide and seek, hiding in the wardrobe, under bed...anything and like the picture above we bought a Fireman Sam Pop Up tent...unbelievable but anything to keep entertained.
He had to have IV antibiotics  every 8 hours for 8 days.


And then we were finally allowed to go home but Jayne had to bring Gavin back in  every day for 3.5 weeks
Posted by Team Gavin Glynn at 6:45 PM