Well super start to the week...ON Monday the nurses in PSI told us that that Gavin urine/kidney infection was now gone...woohooGavin's treatment is going very well and we now have figured out a way to make him more comfortable when getting sedated. We have his main Hickman "freddie" line out ready when we go into the room and hold him facing away from the nurses so they just talk to him while he is in our arms facing out back. It only takes about 20-30 seconds now and it is so much better and less traumatic.He is waking up from the sedation fine too, still groggy for a while but the jelly and juices seem to help him recover quicker.But his bloods are still very low so we have to make a trip into the Kinderhospital in ZUrich tomorrow to see the doctor. Tuesday 3rd JulyTreatment went all well this morning which was great then we went into the Kinderhospital to see the doctors in there.They also were concerned about his blood level and not being able to administer chemotherapy but as we thought the Proton therapy will always come first and if his bloods do not come back up we will just continue the maintenance chemotherapy when we get back home. The doctors explained that one of the major parts for blood production is in your back and also in the hip area...so this would explain why Gavin's bloods are not coming back quickly since the radiation-proton therapy is being administered to his hip/pelvic area.It's funny to see Gavin now with his hair and eyelashes starting to grow which has been the first time since the end of October last year...he looks so weird, we are having bets between ourselves to see if it will still be blonde or darker...He is also saying new words every day and copying what Conor and Lucy are saying..the best one is "I'm BIG" haahaa I'll try see can I record and upload as its very funny to hear.So onwards and upwards with the Proton therapy and we will monitor his bloods every week to see if there is any change.
Below is a picture from today in the Kinderhospital. There is a green digger in the hallway so Gavin loves to play on it every time we go in..and Lucy and Conor too 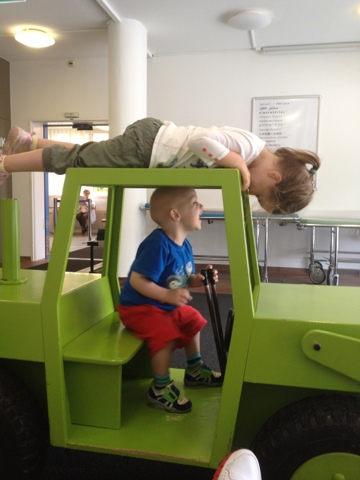 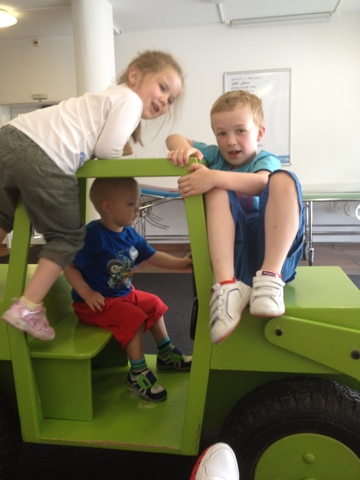 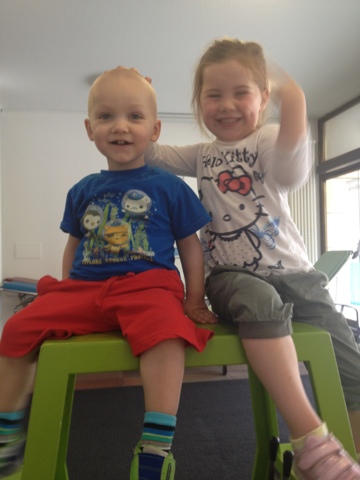